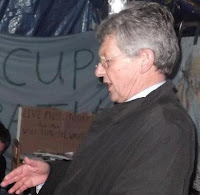 An amendment to the Energy Bill, which would have seen Britain decarbonised by 2030 was defeated by 290 votes to 267 this week in parliament. This would have seen more renewable energy being used, as well as greater usage of technologies such as carbon capture.More info here: http://www.guardian.co.uk/environment/2013/jun/04/decarbonisation-target-defeated-energy-bill-vote

Unfortunately the conclusions of our scientists and other experts on the subject require the backing of MPs in order to become policy under the present political system - and so we hope that they do the right thing and vote for the greater good. And many did, but, alas, Don Foster did not. http://www.theyworkforyou.com/debates/?id=2013-06-04a.1387.3&s=speaker%3A24910#g1407.1

Don is, of course, now part of what David Cameron claimed would be the "greenest government ever". Well after trying to sell off our forests, kill thousands of badgers unnecessarily and now this (and let us also not forget Michael Gove's proposals to water down climate change in the national curriculum), they are surely on the right track.

It is no secret that since his re-election in 2010, Don has supported the government's NHS reforms, with a few tweaks here and there by his Liberal Democrat peers. Don blames Labour for starting us down the path to privatisation, and while he may be right, he has played a role in pushing us further down that path. If you want to read his views, they can be found here: http://www.donfoster.co.uk/?p=642

Those present at the Occupy Bath camp in Queen Square on the night of November 4th 2011 will remember his visit, and his prompt exit,saying he needed to go to a "sports event". The photograph of Don at the top of this page was taken that night. However, those occupiers who were still at the camp the following morning were visited by hoards of anti-privatisation campaigners who had been at a 38 Degrees meeting on the NHS reforms on the very night Don visited the camp, and claimed that he was invited but didn't show up. A fuller account of these events can be found here: http://standingstonesblog.blogspot.co.uk/2012/03/moving-beyond-this-representative.html

He has turned up to other events to justify his support,including another public meeting organised by 38 Degrees, at which he himself had expected a "pretty hostile" reception. http://www.thisisexeter.co.uk/MP-questioned-support-controversial-health/story-15726948-detail/story.html#axzz2VTjf0uO5

Don has ignored the views of a large proportion of his constituents who are opposed to the NHS reforms and voted with the government on his issue. One only needs to look at the election of anti-privatisation RUH Foundation Trust Governor Dominic Tristram to see where Bath stands on this issue.


Disclaimer
Standing Stone's Blog and Foster Watch is an independent blog that is not affiliated with, nor endorses, any political party or general electoral candidate currently in existence. It maintains that all leadership and authority should be questioned and seeks to do just that.
Follow @stonestanding
Posted by Standing Stone at 00:39