Following a previous demonstration against the badger cull in the city centre, around 25 badger activists took to the streets on 6th May bank holiday to protest the cull. Organised by Bath Badger Walk and promoted by Bath Against the Badger Cull, the demonstration sought to publicise the negative impact of the cull and provide advice on how to combat it.

Starting out at the Guildhall, the badgerists then hit Milsom Street armed with leaflets, placards and a badger puppet and engaged with the public about the badger cull. A nice surprise was found at Lush, who had a Stop The Cull box displayed in the window. 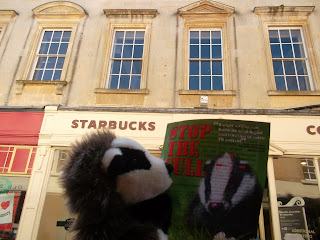 With the anti-cull campaign gaining momentum, demonstrations such as this are only going to attract more and more people. Cull supporters of Bath - beware!

For more on the badger cull, see The Badger Cull - What You Need to Know
Follow @stonestanding
Posted by Standing Stone at 11:10