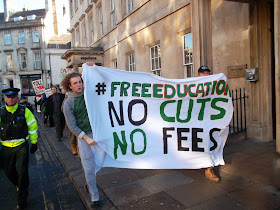 This afternoon, over 100 students and allies marched through the streets of Bath to call for the abolition of tuition fees and an end to the marketisation of higher education. Other universities around the country were also undertaking similar actions. 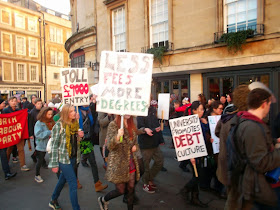 The students issued a statement earlier in the week regarding their blockades of both Bath Spa University and University of Bath on Wednesday 3 December:

“Education is a right, not a privilege. It is a public good that benefits society. Education pays for itself. We also can tax the big businesses that benefit from education, reduce military expenditure and/or clamp down on tax avoidance. The disruption we're causing is a small price to pay in comparison to the destruction of the education system. If we don't do something about it now then privatisation of education is only going to continue. We want universities and politicians to start taking this issue seriously.”
Bath Students Against Fees and Cuts will be holding an open meeting on Tuesday 9th December at 7.30pm in the Westgate pub, to which all students and allies are invited to attend.

Bath students interviewed had the following to say:

"After a demonstration in London on 19th November with thousands of students in attendance, and subsequent actions that campuses across the country have undertaken this week, including our blockades of the entrances to both campuses on Wednesday, and the occupation in Warwick University, it is clear that there is a revival of the student activist movement and that this is only the beginning of the campaign for free education."

Placards spotted included "All I want for Christmas is an end to tuition fees", "No Cuts, No Fees" and our new favourite placard "David Cameron loves Nickelback."

Student Will Pettifer told us "It was important to hold a high profile demonstration in the City of Bath, gather support, network with people who agree with our message, to show Don Foster and the universities that we are not satisfied and won't stop until we get what we want."

Student Maisie Sanders gave us her version of events: "It went really well. over 100 people came. There was lots of support from the public in the streets. The speeches were really good. We've made our voices heard. There were so many people out for the Christmas market who heard what we have to say."